Rockhound of the Year

Each year the club membership honors an active member, or family team, who has made an outstanding contribution in promoting and furthering the goals of the Flatirons Mineral Club as the club’s Rockhound of the Year.

Since its inception in 2002, the FMC recipients have been:

You are encouraged to nominate a club member for this award by using this form:

Nominations can be submitted to Gerry Naugle at any meeting, by mailing to Flatirons Mineral Club, P.O. Box 3331, Boulder, CO 80307 or by emailing Gerry at gnaugle@earthlink.net. Nominations are needed by mid-July.

The recipient of each year’s award is honored in the newsletter of the Rocky Mountain Federation of Mineralogical Societies and is inducted into the Flatirons Mineral Club’s Hall of Fame. The winner is announced at the annual club picnic. 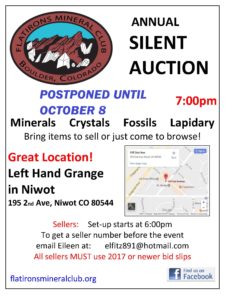